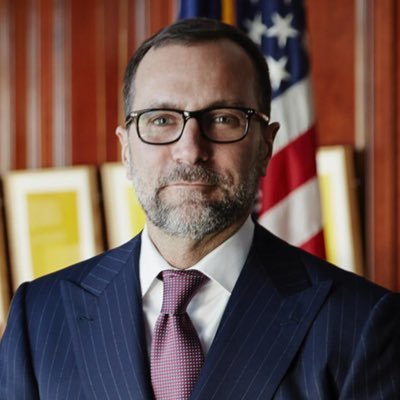 James Costos, an American diplomat and former U.S. Ambassador to the Kingdom of Spain and Principality of Andorra, has dedicated himself to building the important relationship between the United States, Spain and Andorra after being sworn in on August 22, 2013 and continues to serve his country as a private citizen.

During his tenure as Ambassador, Costos worked in support of shared goals, including increased prosperity, improved security, and respect for human rights.

Ambassador Costos remains focused on supporting innovation and entrepreneurship, illustrated by the launch of the annual “IN3 -INCUBED” Innovation and Tech Conference he founded in 2014 and hosted in Madrid to promote President Obama’s entrepreneurship agenda to increase bilateral investment and trade, create jobs and encourage the creation of next-generation enterprises for Spanish, Andorran and U.S. youth. Ambassador Costos merged IN3 with endeavor.org in 2017, and for his work in this field, he was named The Honorary Chairman of The Chamberi Valley Association, a Madrid based non-profit initiative created by entrepreneurs for entrepreneurs.

Ambassador Costos received the Sorolla Medal for excellence and contribution to Hispanic arts and culture from the Hispanic Society of America and he received the Medalla de Oro de Canarias from President Fernando Clavijo Batlle for his work promoting the Canary Islands as a platform for American investment and audio visual production.

His efforts on Intellectual Property Rights protection and overall support of the film and TV Industry, both in the U.S. and Spain, earned him being named Honorary Chairman of the Spanish Film Commission.

Shortly before completing his term in Spain, Ambassador Costos received the Navy Distinguished Public Service Award, the highest award which can be bestowed upon a civilian by the Secretary of the Navy for exceptional outstanding service and long-term benefit to the Navy, Marine Corps and Department of the Navy.